【Message from the Secretary General】

It is an honor to greet you all from Tokyo, Japan. As a Secretary-General of University Student Chamber International (UNISC International), I am privileged to state our mission of contributing to international cooperation and engagements of students in line with the objectives of the United Nations.

As students, our active participation and talents will shape the sustainable bonds between international communities for a prosperous and peaceful world. We believe in the power of internationally minded students, and that they will become future leaders of the world by bringing positive energy and mutual cooperation.

In order to fulfil our mission, we are expanding the networks and assets of University Student Chamber Japan. With the drastic changes taking place in the world, we provide a platform for students’ international exchange, and represent their opinions through symposia and general meetings. With the division in Japan as its headquarters, we hope our work to strengthen the ties among students from many different countries will inspire the worldwide growth of similar networks, enthusiasm, and endeavours.

Above all, I would like to express my deepest gratitude all those who participated in various ways for their kind support and contributions to our organisation.

「As an international organization of the university student chamber all over the world, we agree with the philosophy of United Nations and contribute to the world’s prosperity and peace by connecting the students internationally and enhancing the international cooperation.」

Tatsuya HAGA, Secretary General for Honorary Consulate of the Solomon Islands in Tokyo 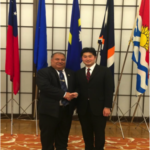 ECOSOC is the only main organization in the UN having a clear official structure for NGO to join.

・Attend the international meeting and event.

・Present an opinion at the international event in both written and oral form.

・Hold an official side event.

・Have an opportunity for lobbying and making the connection. 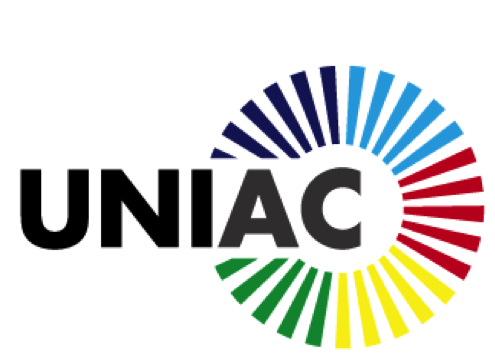 What is UNIAC?
We, UNISC, organize UNIAC to maximize our scales of activities since 2018. In 2018, we set a theme: Think about Sideshows can we create the future that world’s youth leaders want? At the meeting after the representative students share their achievements and measures for each country’s different Sustainable Development Goals (SDGs), they are divided into 17 groups for each goal and discuss how we should deal with them for the realization from a various perspective such as governments, companies, and youth. On the final day, UNISC present the opinions came out from each group, and we make a proposal for SGD’s. Our proposal will be submitted to ECOSOC!!
Finally, we became the First-time organization run by students based in Japan to be officially recognized as the United Nation’s NGO. For the first time of UNIAC since the recognition, we will launch 6 days of the conference in this autumn.
Theme of UNIAC 2020

The notion of “Human Security” was proposed by the late Sadako Ogata, the first Japanese to become the high commissioner of the UNHCR, and Amartya Sen, the first Asian to receive Nobel Economic Prize.
Due to fast-growing globalization, countries are becoming more inter-depended than ever before. Therefore, problems such as poverty, natural disasters, disease, terrorism, sudden economic and financial crisis give significant impacts on people’s lives as these issues become borderless topics.
In order to counter current international problems, unlike the previous approaches which give states main roles, it is necessary to empathize human’s roles and understand numerous actors’ and categories’ relationships universally.
As we show condolence and respect to late Ms.Ogata by setting “Human Security” as agenda for this year, we wish delegates around the world deeply understand the concept, which Japan has been taken initiatives for many years. Then, hopefully, more detailed and realistic opinions for achieving SDGs will be brought up in the end.
Event Details
I. About the meeting
Participants are the Youth around the World
Number of Participants：11countries and total 36 participants
Type of Event：International Meeting
Will be possibly supported by：JICA, The Ministry of Foreign Affairs of Japan.
Due to Covid-19 outbreak, we postponed the gathering of UNIAC from spring to autumn.
Stay tune for the updates!
For your information, the previous theme;
「Think about SDGs〜 How can we create the future that world’s youth leaders want?〜」

At the meeting after the representative students share their achievements and measures for each country’s different Sustainable Development Goals (SDGs), they are divided into 17 groups for each goal and discuss how we should deal with them for the realization from a various perspective such as governments, companies, and youth. On the final day, UNISC present the opinions came out from each group, and we make a proposal for SGD’s.

I. About the meeting

Participants are the Youth around the World

Will be possibly supported by：JICA, The Ministry of Foreign Affairs of Japan.

Aug. 10th    Presentation about each country’s acts for SGDs.

Aug. 11th    Discussion, Speech will be given by special guest

Build a relationship with International Organizations

❖    Interview with the representatives and Emit our mission.

❖    Manage Internships and Publicize the Events

⇨⇨What we want to achieve…
1.Build a trust relationship between the students and international organizations.
2.Raise the larger amount of global human resources in Japan to improve Japanese global presence.

In 2017 Jan. 27th
Official side event of World Assembly for Woman 2016 at Sophia University.

Invited the students from Caribbean and Oceania, and discussed the international cooperation.

Cosponsored by UNIAC and APIC

What is Women’s Leadership Summit Committee (WLS)?
Inviting female guests with various fields to discuss about the works and private lives while achieving distinguished career as women. By including guests and participants, we will discover the best ways for women empowerment.
People having following interests, it will be more productive opportunities if you join!
1.What’s the ideal career-path for female?
2.How do I balance between work and private lives?
3.How can I success globally?
Check the updates!
⑴. Women’s Leadership Summit “This is Her Life”
on July 2nd, 2017 at Osaka University

Supported by:
Ministry of Foreign Affairs of Japan.